Food, sun, rain, cider, mussels, tv chefs and local produce: the weekend had it all

Conwy feast; two days of food, changeable weather, tv chefs and a variety of activities. Generally I love the Conwy feast but this year it felt a bit of  a scrum. I don’t know if it was because some of the marquees had moved from their previous location (squeezing in beside the rest on the quayside) or that there were just more people there, but it felt too crowded, which made it almost impossible for me to see or do half of the things I wanted to.

The weather didn’t bode well on the Saturday morning with lashing rain and sideways wind. Thankfully and against expectation it had cleared up by midday. This was also the time that I managed to get the teenagers out of bed and ready to leave. So much for the early start! I’d also had to make a last-minute dash to my neighbours who were checking the Welsh translation on my flyers, he’d lost the flyer so the pair of them had to do a quick run through in order for me to make some corrections. There were a few…Welsh mutations are baffling if you ask me!!! 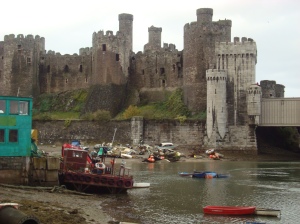 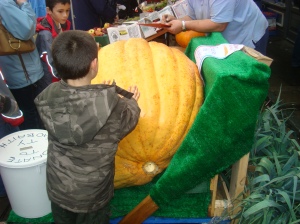 By the time we arrived the festival was packed. Although it was good to see so many people there supporting local producers and having a great time, it was impossible with kids to get through the crowds. We all lost each other, my mate couldn’t find us and the kids started to moan, they were hungry, it was too busy, they wanted to sit down, they wanted to meet friends, it was boring. I found it rather stressful too as I obviously had too many priorities, kids, meeting producers and tasting, making contacts and so on. With hindsight I should have had a ‘me’ day and a family day. Oh well we live and learn! All in all Saturday was a wee bit stressful, but we did get to do a bit of tasting. Conwy mussels for lunch, nice but a bit too salty and buttery.

The favourites of the day were the Anglesey apple juice, chocolate pudding from the pudding compartment , the usual cheeses from Y Cwt Caws and Derimon and from the Snowdonia Cheese Company plus various alcoholic beverages from Condessa and plenty of spiced cider!!

We also chatted to Ian Sturrock, who provided us with our organic apple tress and signed up to receive our weekly bread supplies (including speciality sourdough bread for supper club) from local artisan baker Mick Hartley of Bethesda Bakers . I believe he has been mentioned in the Guardian and he does pretty much the same as us in the ‘pop-up restaurant’ world except he has a ‘pop-up’ bakery. For those in the Conwy Llanrwst area we found out that Conwy food direct are planning a local food delivery service.

Conwy mussels (mine are better though; these were too buttery and salty) 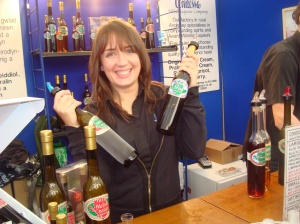 the lovely, helpful assistant at the Condessa stall

Sunday was better. The teens decided not to come, so did the other half. I ended up going back to the festival with my friend, her daughter and the little un. We hung out in the castle looking at  medieval food, tasting medieval recipes and doing kid stuff. We then went off to the quayside and watched Bryn Williams (of Odettes restaurant in London) poncing around with umpteen film crews around. But i did manage to do a bit more tasting and some shopping in the farmers market. While doing so Bryn and his film crew turned up again causing maximum chaos in the packed out marquee as he ostentatiously sniffed at the vegetables (while I tried to hide from the camera. I’m sure they thought I was a stalker). Unfortunately I didn’t get the opportunity to see any of his demonstrations, or those by Colin Presdee (author of Food Wales), or hand out that many flyers due to the masses of people and the stroppy kids. But it was a good weekend even if i’m skint now!!