Whilst having a well-earned lie in on Sunday, listening to the birds building their nests in the eaves of the house and basking in the morning sun streaming through the skylight, a smile spread across my face. Thoughts of the previous nights supper club caused that smile and got me thinking about what I really love about doing it….the combination of meeting new people, providing fine food and a homely atmosphere is too simplistic. It’s much more than that. Now that we are into our sixth month and word is starting to spread I have realised it is the whole event that I enjoy, from sourcing the food, deciding what to cook, the anxiety about who will come, whether it will all come together in time, whether the guests will they like it, will they turn their noses up at my house, my kitchen, my family…then the adrenalin surge followed by relaxation as the guests arrive and service gets underway. This is replaced by elation as the evening progresses and the wine and conversation flows. I love the fact that even though I don’t know whats going to happen and every supper club is different. I also like it that I don’t know who has booked, although more often than not it turns out that I actually do know some of the guests…or someone else at supper club knows someone….a quirk of living in a small close-knit community.

Saturdays supper club was the perfect example of this quirk. From the clandestine cheese drop off in the B&Q car park (cheese and cash exchanging hands over the bonnet of the car, accompanied by furtive looks from passers-by) to the purchasing of vegetables from my dance partner and Pilates instructor…who also works at the local whole food shop Saffron in Llanberis  http://www.llanberisorganics.co.uk/ a great source of organic fruit and veg when there is little else around….

The cheese came from my usual sources; smoked Brie from Derimon http://www.derimonsmokery.co.uk/  Black bomber cheddar from the Snowdonia cheese company http://www.snowdonia-cheese.co.uk/ and a new soft cheese simply labelled CAWS (which is Welsh for cheese) from Ryd y Delyn farm (for more info contact menaijones@hotmail.com they don’t have a website as yet)

The final menu was a mix of tried and tested, alongside the new and it went as follows

Mixed Bruschetta, with a tomato salsa topping, roast figs with honey and Ricotta with prosciutto and basil and balsamic vinegar dressing. I hadn’t made them before but the idea came from the salad club blog (www.saladclub.com ), a great source of inspiration. They certainly went down well and made a perfect accompaniment to my ever popular and rather lethal Champagne cocktails.

This was followed by carrot and coriander soup with chilli and ginger, as served on Valentines day supper club. My own variation with the chilli and ginger but i had to make it again as it went down so well.

I have also served Jamie Oliver’s recipe for roast chicken breast with basil butter, wrapped in Pancetta and served on a bed of winter leaves, roast potato , cherry tomato and olives before. Again the chicken was very well received and barely a scrap was left.

peeled pears...unfortunately no pictures of the end result!!

My diners had requested anything but a chocolately dessert (my usual choice being a chocolate fan) so I settled on a fruity pudding of Pear Financier (a Gordon Ramsey recipe) served with pears poached in red wine and a dollop of crème fraiche. Apart from two ladies who were not pear fans, the pudding also disappeared. The ladies in question were quite happy to top up with more wine instead!

Apart from a few minor hiccups (last-minute problems with sourcing decent olives…my home made French bread did not come out as planned so I had to dash to the supermarket to buy some and both kitchen helper and substitute kitchen helper failed to materialise) all ran remarkably smoothly….although once again I failed on the picture front…especially as I was so busy and two helpers down.

The evening took several bizarre twists, the first of which was the request to play Greek music….I didn’t ask!! The next was the rearrangement of the chairs so that the somewhat belated ‘secret santa’ pressies could be handed out….the few I caught included half a dozen eggs, a chocolate icing set, but as I was busy arranging cups, plates, cheese, chutney and coffee at the time I missed most….but at one point I came in to find a man taking his trousers down to display his Batman pants and a lady drinking from a piss pot….I couldn’t resist running back for my camera!!…. 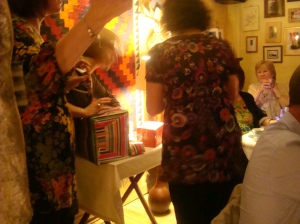 At the end two random pressies were passed to Sean and I ….they swore they didn’t know what was in them…I got a pair of sexy black undies (very apt for those that know me) and Sean got a knitting doll (i’m sure there is something I could say about this, but he’d probably end up being isnsulted and not speaking to me)…I’m sure it would have been funnier and more photo worthy if Sean had received the pants.

The evening drew on, the laughter grew louder, the wine continued to flow and everyone got very merry!!! Including us who had a fantastic night. There really is nothing better than to hear diners having such a wonderful time. Several came into the kitchen later and told us that they had been somewhat sceptical when they were told they were going for a ‘secret supper’….one of whom had discovered on reading the blog that she recognised me, this simply made her feel more anxious about coming into my home….but I think and I hope they were all won over and will return again soon. One of our guests, who was methinks slightly worse for wear by this point stated emphatically “I will come back, with my friends this time”….his mate who was stood next to him looked affronted and said “and what are we then?” (I think he meant his OTHER friends…..)

This was one of our best supper club nights yet and I hope to see them all again soon.

2 responses to “Festive pants and piss pots of plonk”