The instruction for this private dinner for twelve was soup to begin, red meat for main and plenty of everything!! Simon, who organised the evening was a returning guest, this time accompanied by a different group of friends, mainly teachers, but all lovers of good food.

With the simple instructions above I settled on a seasonal, River Cafe inspired menu. I use the River Cafe Cook book a lot at home  and I particularly love their Pumpkin soup recipe (although I usually add a bit of ginger) so I decided to do this for starter, especially since Pumpkins are just coming into season and we’ve had so many at Moelyci. For main I chose a dish of braised beef wrapped in Coppa de Parma, with Parmesan mash and seasonal veg.  Living in Wales and not having the choice of deli’s and shops available elsewhere, I ordered my Coppa di Parma and aged Parmesan from Italian online deli nife is life and amazingly they delivered to my postcode (believe me, not everywhere does) and within two days!!

For dessert I put my own twist on the classic Italian Tiramisu (one of my favourite ever puds), this time with cointreau and white chocolate (I have also made it with Baileys and white chocolate which is just as yummy) and served with a drizzle of sharp Tayberry sauce).

The twelve made for a very cosy group, but having been before they were prepared for this. Sat at two tables of six (a girls table and a boys table!) we started the evening with Pomegranite Bellini’s (Three parts Prosecco one part Pomegranite) and Focaccia ‘shots’ (al la msmarmitelover ). All ran smoothly until Anya, one of my teen helpers had to disappear…she’d given vague indications about how long she could stay and what time she  had to leave (her social life was calling!!) but she chose the moment immediately before the main course was about to be plated to make her exit…subsequently for the first time ever, I had a little panic….well quite a big panic actually. The beef took longer to cook than anticipated (twice as long actually), I worried about guests waiting too long for their mains, then I worried that the food was going to go cold as I struggled to carve the beef in an attractive way….it started to fall apart….(the beef not the evening…although I was well on my way to do doing the same). The sauce ran out and I had to make more. I’m sure they were just being polite when I asked if the beef was too red/not hot enough/OK….they said yes, but I know it could have been better. So sick was I of trying to rectify the main course that when one or two of the men hopefully suggested seconds, I think I was a little too quick to say ‘sorry, none left’.

After the battle with the beef everything else was stress free. Thankfully the Tiramisu redeemed me, especially with the girls who raved over it. One lady put away three portions (some passed over buy the men who didn’t have a sweet tooth)….the plate was wrestled from her grip as she proceeded to embark on plate four!!…One friend said “if there’s food about, she will eat it”….As a very fit looking sports teacher, I guessed it didn’t do her any harm!!!

Food, beer and wine left little room for cheese, although some gave it a go. Pots of coffee rolled out and the entertainment began. One chap turned to me and said “10% of the Welsh can sing…..and the other 90% do!!” before launching into song with the rest of them. At some point the piano lid was opened and the singing was accompanied by our very out of tune upright.  As the evening drew on I wondered if the neighbours were able to hear all of it….

The last time Simon visited supper club (read back over festive pants and piss pots of plonk) he showed us his (festive) pants. He had strict instructions not to repeat the event. By the end of the night we were once again graced with a vision of Batman pants (no I didn’t take a picture, but if he does it again next time he comes I think I will be obliged to!!).

It was a good night and I learnt a few lessons. No complicated beef. Make sure the teen waitress is committing to help the whole night. Tune the piano and don’t let strange men show you their pants in the kitchen!

The menu for the evening was:

Cook the onion in the oil and butter until soft. Stir in garlic, marjoram, pumpkin and potato and cook for a minute or two. Add chilli, ginger, salt and pepper then add enough stock to just cover the pumpkin. Simmer on a lowish heat until the pumpkin is tender (20 mins or so). If it needs more stock just keep topping up.

When its cooked strain off about a third of the stock and set aside. Puree the rest in a blender or food processor. The mixture will be very think. Return to the pan with the stock put aside. Check seasoning and serve. I served it with sliced and toasted ciabatta or sourdough, rubbed with garlic and drizzled with olive oil. I also scattered over a handfull of parmesan cheese.

scooping out the pumpkins for the soup 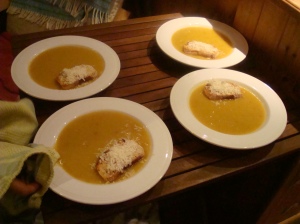 a mixture of orange, white, rainbow and purple carrots

the teens hard at work

Large dishes of Tiramisu...looking somewhat like crumble with the white chocolate coated top

sing-song around the piano