An Easter postcard from Kiel

Easter in Germany is a far different experience from the one back home. One of the traditions I like the most is the dying and painting of eggs, an activity carried out by children all over Germany in the run up to Easter.  Common in schools, kindergartens and at home, the eggs they create end up decorating the house for Easter Sunday. I think it’s a shame that these kind of activities have died out in Britain and that there is very little creativity left. These days consumerism has taken over and everyone has fallen into the trap of buying large quantities of huge expensive branded eggs. Here in Germany however there is great excitement, but without much of this consumerist obsession; the Easter egg hunt is the thing, with lots of little eggs and chocolate treats being hidden around the house or garden. The children love the search, running off in eager anticipation clutching their baskets determined to find as many as they can. I liked this a lot and although secretly I wondered if my kids would miss their large trashy Easter eggs, I don’t think they did since both rushed around with mad enthusiasm, scrabbling through plants trying cramming their baskets to the brim before bringing them back to add to the stack ready for sharing at the end of the hunt. As well as chocolate eggs, each child had their own papier-mache egg filled with a special gift just for them. In the case of the teen it was jewellery and a leopard print belt, while the kids had a wealth of lego and toys. 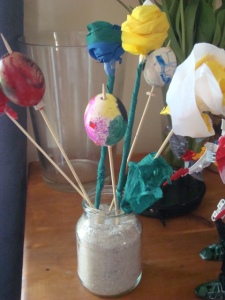 Easter traditions were in abundance at the local produce market in Kiel on Easter Saturday. Coloured eggs adorned stalls, Easter baskets for sale everywhere, as well as the usual range of predominantly local produce. The farmers markets in the UK are a quarter of the size of these places and sell a tiny choice of produce in comparison. Here local farmers sell their own goods as well as buying and selling produce from their close European neighbours. Local German cheeses share a counter with those from France, Holland, Switzerland and Austria; Dutch tulips sold along with those grown closer to home. It was a great start to the Easter weekend, providing an opportunity to discover the tastes and specialities of Northern Germany and shopping with friends who are locals, gave an even greater insight into the amazing seasonal produce available.

In some ways it’s not that different to Britain particularly the kind of produce on sale, although everything seems ready a little earlier. This may just be a fluke due to the particularly hot weather, (since Kiel probably has the same kind of climate to Britain, especially North Wales), but there certainly were things in greater abundance than in Wales. White asparagus for example was well and truly in season and we bought a big bunch for barbecuing on Sunday. There was also lots of rhubarb, Feldsalat (or field salad in English) which looked pretty much like lambs lettuce to me, Baerlauch or ramsons (wild garlic in English which has been in for some weeks back home) and a variety of early salad leaves. We got a bit carried away stocking up ready for our alternative Easter Sunday celebrations. We bought not only fresh salads but also a variety of cheeses, meats, german bread, sweets and even meringues for dessert.

I love markets in Europe and it was a brilliant way to spend Saturday morning. Laden with produce and chocolate we headed back home in preparation for a trip to the beach. 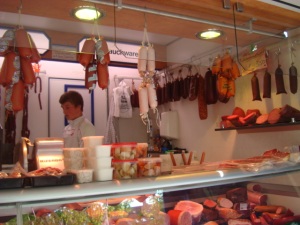 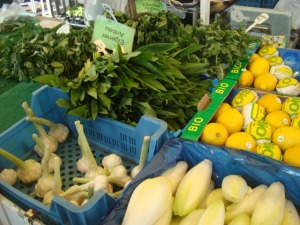 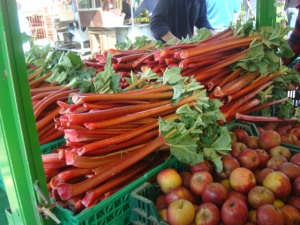 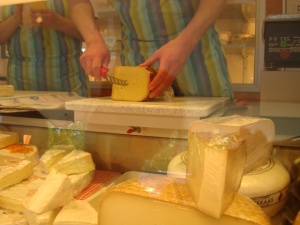 One response to “An Easter postcard from Kiel”