Recipe: My version of Moro’s chocolate and apricot tart 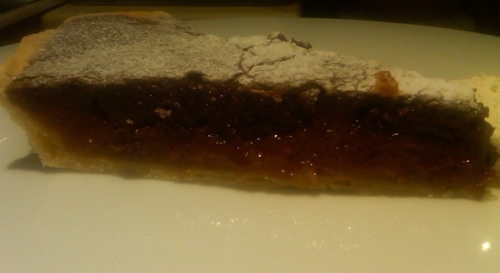 This recipe was inspired by my recent trip to Moro. No hold on a sec, that’s not entirely honest; inspired isn’t really the right word. Perhaps spurred on is more accurate, or maybe challenged…anyway, let me elaborate.

While I was in London I celebrated my birthday with dinner at said restaurant. As it was my birthday I was strictly banned from

My family hate me photographing their food or ‘working’ while socializing with them. The teen even exclaimed once that she wanted to ‘copyright’ her dinner so I didn’t photograph it. So this said I have no photographs of Moro, but I have a lot of good memories of the tastes, textures and combinations of flavours served to me on the night. The food was truly delicious and well worth the trip up to Exmouth market, but there was one thing that sadly failed to hit the spot; their chocolate and apricot tart.

Now I’ve read a few reviews and people have raved about it, but none of the four of us were convinced….in fact none of us even liked it! There was barely a hint of apricot and the chocolate was so dark and strong it was overpowering. It simply lacked any depth to the flavours.

I came home and thought about it a bit, strangely unsettled that something using chocolate didn’t work! So I decided to experiment a bit.

The Moro tart uses an apricot paste called amradeen, widely available in Lebanese shops, but not here in North Wales so I substituted it for organic dark apricots, doubling the measure for a stronger richer taste.

To the chocolate mixture I also added 2 tablespoons double cream, which I think lightened and balanced the flavours….More apologies for the shoddy pictures. I now have a new camera so I’m hoping my images will be a tad better from now on (hooray!!)

juice of one small lemon

One bar of Divine or other good quality chocolate (about 100g, but no more than 150g) at least 70% cocoa

Sift together the flour and icing sugar and rub in the butter until it resembles fine breadcrumbs. Add the egg yolk and a drop of icy cold water and bring together until it forma a ball. Wrap in cling film and allow it to rest in the fridge for about half an hour. Roll out to fit an eight inch tart tin, prick the bottom lightly and line with baking paper. Bake in the oven for 10 minutes at 200 degrees, gas mark….after 10 mins remove the baking paper and cook for another 5 minutes until the base is ‘set’…i.e. firm but not turning brown. Remove from the oven and leave to cool.

Chop the apricots roughly and put in a pan with the water and lemon juice. Simmer for about five minutes or so then turn off the heat and allow to plump up and soften. Tip the lot into a blender and puree until smooth.  Spread the paste on the cool tart shell and leave to set for 10 mins or so while you prepare the chocolate mixture.

Combine the chocolate and butter in a heat proof bowl and either melt in the bottom of the warm oven or if you want to do it the ‘conventional’ way make a bain marie by putting the bowl over a saucepan of gently simmering water. While it’s melting, whisk the eggs and sugar together until light, and then fold into the slightly cooled chocolate mixture along with the double cream. Spoon over the apricot tart, and bake in the oven for 25 mins, at 180 degrees. Remove from the oven while it still has a slight wobble to it, it will finish setting as it stands and cools.