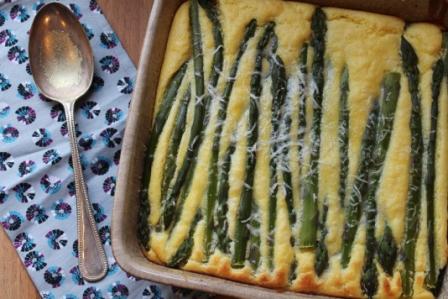 Better late than never, the asparagus season is finally upon us. That late cold snap left me hanging around, waiting with bated breath for the first few stalks to arrive. I love it when asparagus season arrives. To me its a sign that summer is just round the corner; the weather has warmed up nicely and an increase in daylight hours brings everything to life again. I’ve never had much luck or patience when it comes to growing my own asparagus so I look forward to the time when Hooton’s crops are ready. But then to my horror I heard a dreadful rumour. The whole crop had failed because of the cold wind last week.

Nooohhh!! I rushed to the farm shop (it wasn’t just to check out the authenticity of this claim, I did have to do some other shopping as well….really, I’m not THAT obsessed) and asked in a hushed and slightly worried voice..‘is it true? the asparagus has failed’

The woman in the shop looked at me reassuringly. No, she said. Don’t worry, it’s just running a bit late. Huh! Like everything in my life!

But now it has appeared. The sunny weekend weather sped up the process and so they cut first stalks this week. And typically I missed them, although I did send manage to get some put by for me via a desperate twitter plea.

When asparagus stems are young and tender they need little accompaniment and no peeling. Naturally sweet, they need only brief cooking (a quick blanch in boiling water is more than enough) and are perfect in a salad, with hollandaise sauce or in the classic dish asparagus mimosa.

Mind you, the day I collected my swag the rain lashed down, the wind blew and I even turned the heat on in the house for an hour! I wanted something warm and comforting and so returned to my old favourite, asparagus and parmesan souffle gratin. It’s a recipe I came up with a couple of years ago. Combining the lightness of a souffle, with the simplicity of a gratin this recipe stops the worry of whether it will rise or not. Topped with briefly blanched stalks of asparagus it is simple, yet sophisticated enough to serve at a dinner party. I’ve made it for supper club guests a couple of times and it’s always been a hit.

Butter a large gratin dish and sprinkle in about a third of the parmesan cheese. Place milk in a pan with the onion, herbs, nutmeg and a good seasoning of salt and pepper. Bring gently to the boil then turn off the heat and leave to infuse for about half an hour (or as long as possible).

Make a roux with the butter and flour then gradually stir in the strained milk. Return to a low heat and cook for about 10 minutes stirring constantly until you have a smooth white sauce. Add two-thirds of the parmesan and remove from the heat. Allow to cool whisking occasionally to prevent a crust from forming. When it is lukewarm whisk in the egg yolks then cover with buttered paper until it has cooled completely.

Blanch the asparagus in plenty of boiling water for a minute or two (they should be tender, but still green), drain,  then refresh in plenty of cold water to halt the cooking process.

Beat the egg whites with the juice of half a lemon and a pinch of salt until they form stiff peaks. Put the souffle mixture into a large bowl and whisk in one tablespoon of the egg white to lighten the mixture, then gently fold in the rest of the egg white with a spatula. Pour the mixture into the greased dish then lay the asparagus in a row on the top (as in the picture above). Bake in a hot oven (230 degrees C, gas mark 8, 450 degrees F) for about 18 to 20 minutes. The gratin should puff up and not wobble when shaken.