Some girls other halves bring them flowers, others bring chocolate, jewellery, wine, underwear….mine, what does he bring home to woo me? A lobster which he’d named Vinny. 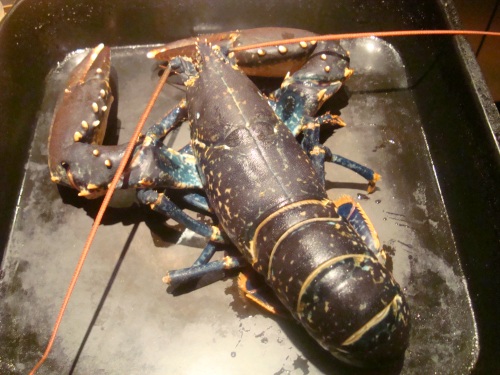 Actually, it does sort of impress me, in a weird kind of way. The fact that in true hunter-gatherer style he wrestled it from the sea with a rod and line, while other fishermen looked on open-mouthed in a style reminiscent of the MAN V SEAL escapade in Ireland (see earlier post)…this time MAN V CRUSTACEAN.  He brought it home, claws taped and still alive.

The kids had a field day with it. Opening and closing the fridge every five minutes, insisting it be ‘saved’ and returned to water only to almost kill it by putting it in a bowl of unsalted water. A narrowly escaped disaster as this would have been the height of cruelty, plus from a chefs point of view lobsters really should not be consumed after they have died, particularly if you want to retain their flavour.  So, Vinny the lobster sat in the fridge for a day until the other half and I decided it was time for our lobster supper.

The problem is I have a thing about lobsters. I love the taste of them but after a close encounter with a large bucketful while working in a restaurant as a teenager and later watching them boiled alive I just can’t bring myself to eat them (or certainly not deal with a live one anyway). Watching poor Vinny wave his dopey tentacles around the fridge made me realise that I still have a thing and so when that pot of water came to the boil and it was time to throw Vinny in I couldn’t do it.

I had to find a kinder way to avoid further trauma. There are now RSPCA guidelines on humane ways to kill crustaceans before throwing them in the pot, so reducing their suffering and saving the poor chef dispatching them from PTSD. They recommend electrical stunning, but of course the equipment is expensive and if like me you only end up with one randomly and very occasionally, its unlikely you will have it knocking around the house. The best option for the home cook then is to follow the RSPCA piercing through the brain method. First put your lobster in the deep freeze for 15 minutes. This renders it ‘unconscious’ (if you leave it too long it starts to destroy the flesh as it begins to freeze and too little time just gives you a rather chilly lobster). At this point it should be ready to plunge into boiling water although some lobsters will wriggle still. In this case you may still feel the need to finish it off before boiling so just use the RSPCA method to pierce the brain and mid-point.

Of course the other option is to calm your crustacean with lobster hypnosis, do feel free to try!!

For my part I ran and hid and let the other half dispatch the poor creature! Pathetic I know.

An insensate Vinny was eventually plunged into boiling water for a couple of minutes…drained, basted with butter, sprinkled with salt and pepper and wrapped in a double thickness of baking parchment tied with string. He was then baked in a preheated hot oven (230C) for about 30 minutes. I think we probably over cooked him a little, but he still tasted delicious served with some salted parsley and lemon (Maitre D’hotel) butter, bread and a rather nice Pinot Grigio for a very simple but decadent supper starter. 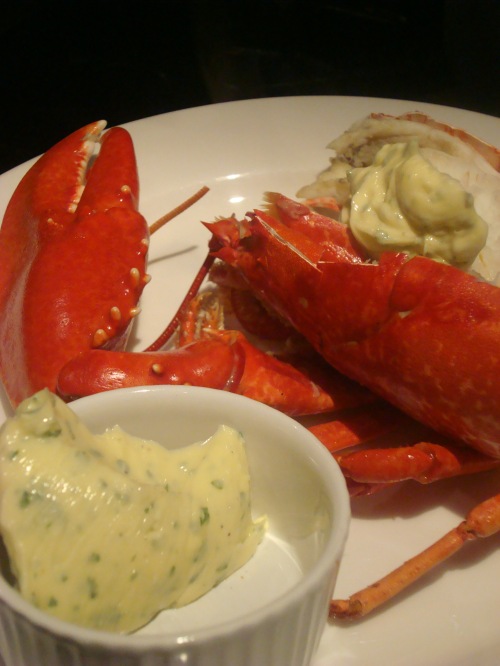