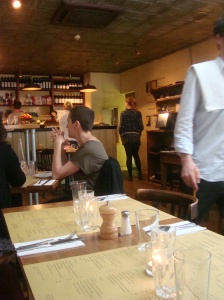 It’s not often I get to totally indulge myself, but on a rare free day (meaning no kids) during a visit down south to see my parents, I took a trip into the city for a lovely lunch, before a meeting with my writing mentor. It’s no secret that I miss eating out and that there is little opportunity for leisurely lunches back in Wales and since i’d read several glowing reviews of Polpo and sister restaurants Polpetto and Spuntino in the past few months I thought I’d pay the first of these a visit to check it out.

I wasn’t entirely convinced I’d like the ‘small plate’ concept as usually my leaning is towards a good-sized serving of hearty country fare, but since none of the reviewers appeared to have left the place hungry I guessed I should put my faith in their comments.

Polpo is beautifully laid back and full of understated style. Modelled on the traditional Venetian bacaro but housed in a traditional 18th century London building, it exudes its own rustic charm. My table faced a pretty little internal courtyard, bathed in sunshine and overflowing with scarlet geraniums I could almost have been in Venice. Well maybe not, but it certainly succeeded in reminding me of some of the places I visited when I was there many years ago.

Thankfully I got there early enough so that I didn’t have to wait for a table; fifteen minutes later the place was packed out. The young friendly waiters and waitresses were attentive and helpful and very ready to answer my questions “what are polpette”?  and the menu was adequate without being too extensive. 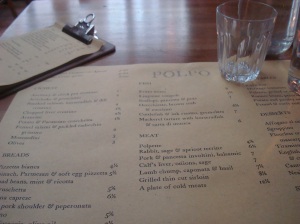 I ordered smoked salmon, horseradish and dill crostino to begin and then Polpette (meat balls), fennel and endive salad with almonds and some grilled focaccia to follow. I wasn’t sure how big the small plates would be so I erred on the side of caution not wishing to leave hungry! In the end I found that I had over ordered and couldn’t manage the last piece of focaccia. 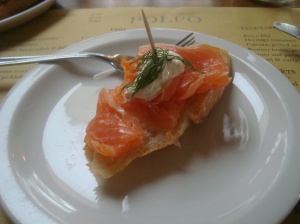 I was pleasantly surprised at the good chunky crostino with its generous helping of smoked salmon and the dollop of horseradish was as I like it, creamy and with a kick, but not too overpowering.

The polpette were deliciously rich and tomatoey, tender and juicy while the fennel and endive salad was sharp and fresh. The two complimented each other beautifully and I really didn’t need the focaccia, which was the only disappointing thing about the lunch. I like a chunky, earthy focaccia liberally strewn with rosemary and garlic, which is how I make it, while this was a rather thin and more ciabatta like bread. 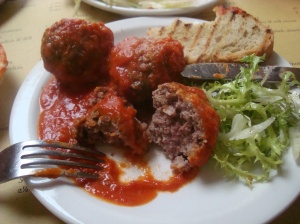 I'm a rubbish food photographer...my stomach got the better of me and I layered everything on to my plate before I photographed it!!

While I still had time to spare I finished with a Machiatto and some chocolate salami, one of my favourite coffee accompaniments and one not often seen on restaurant menus. The waitress and I had a long conversation about it and I ascertained that this was a sugarless version made with figs. It certainly wasn’t as sweet as when I make it using cranberries or cherries, but was just as nice, with its slightly salty, earthy taste derived from the nuts and figs. It went very well with the dark chocolate and coffee. 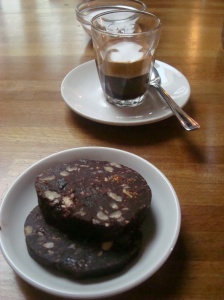 Russell Norman and Polpo definitely won me over and gained another fan. I have to admit that it really wasn’t a hard job; I am already a lover of good Italian food and all they had to do was give me that and plenty of it.  I want to go back. I want to take friends, but I will now have to wait until my next visit to London to try one of the other restaurants in the group.  I can’t wait! 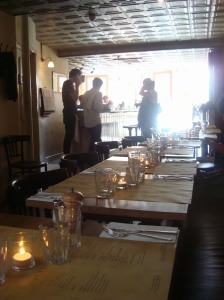 My lunch cost me £20 for 3 courses and coffee. This included service. Bookings can only be made for lunch.