Ok this is my very last post about The Ethicurean cookbook.

My mother informed me that my last post was rather harsh….I didn’t mean it like that. I was simply being my usual brutally honest self, saying out loud the things that popped into my head while I was reading the book. I have probably managed to alienate them with my comments forever, but I still like the book, want to visit the restaurant and have already latched on to recipes that are fast becoming favourites.

I’ve found that it’s the simpler ones that make the best everyday suppers. They take little time to rustle up after a busy day at work and make the perfect summer dish. What I crave is something light on a hot summers evening and we’ve had enough warm sunny weather to justify my pushing the light summery suppers!

This salad is perfect paired with a glass of cold crisp Pinot Grigio or Prosecco and is also elegant enough for a dinner party / supper club starter (I’ve made it several times I like it so much). 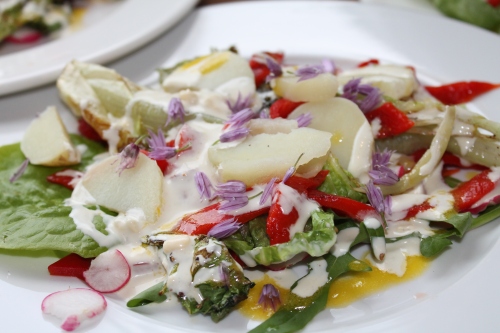 6 to 8 little gem lettuces (one or two per person, cut in half lengthways)

Rapeseed oil (I just invested in some Cotswold Gold, which is just the best)

To flame grill the peppers: either cook on a barbecue, under a hot grill, or directly over the flame of a gas cooker using a pair of tongs to turn, until the skin is blackened all over. Place peppers in a sealed plastic bag for about 10 minutes. This helps the skin come away from the flesh.

When cool rub the skin from the peppers removing all the black bits, cut in half and scoop out all the seeds then either tear the peppers into pieces or chop roughly.

Cook the new potatoes in their skin in a pan of salted water. They should be just tender and offer a bit of resistance when pierced with a knife. Very fresh potatoes will cook quicker (10 minutes or so) than ones that have been in the supermarket a while (15 minutes).

Make the blue cheese dressing by putting the chopped cheese, creme fraiche and seasoning into a blender and whizzing up (or mix together in a bowl with a fork).

Heat a griddle pan over a high heat. Brush the little gems with some rapeseed oil and place in the griddle pan. Leave until some chargrill lines form and then turn. Make sure you don’t over cook them. I sprinkled some salt and pepper, crushed coriander seed and ground coriander over the little gems at this point.

Put some mixed leaf salad on to each plate with the charred little gem, scatter with potatoes and dress with the salad dressing. Add some of the flame roasted peppers and dot with the blue cheese dressing. Finish with a scatter of edible flowers and enjoy!

The Ethicurean cookbook…review and dinner 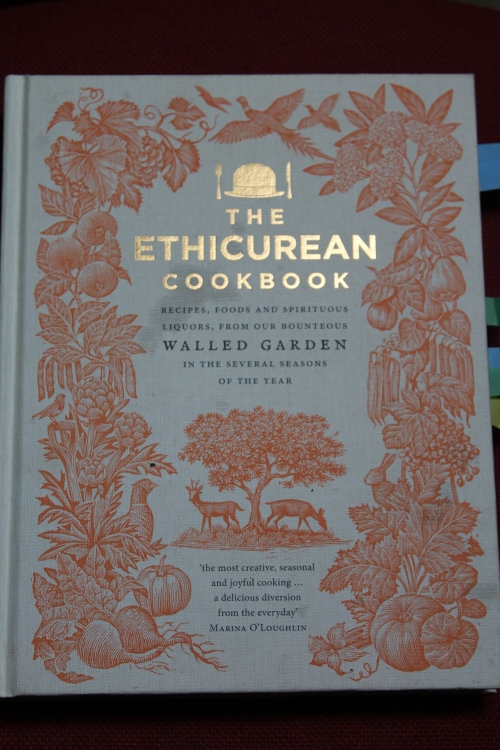 I don’t usually base a whole supper club menu on a recipe book however this dinner was an exception. Back in May I wrote a recipe review for the Food Travel Website. It came from The Ethicurean Cookbook but as it was  a blind tasting I didn’t know that when I cooked it. I wasn’t that impressed with my particular recipe, although in its defense I struggled to find some of the listed ingredients and components of the dish were in different sections of the book (bits I didn’t have). After the reviews were published a copy of the book came winging its way over to me.

Now that I have had time to read through the book and get a feel for it I understand better the ethos, ingredients and techniques used by the team at The Epicurean. I like their approach and their commitment to traditional British production methods, artisan ingredients and seasonal produce. As a book for an experimental, confident cook or chef its great but it’s not for the faint hearted. There are some things I don’t like about the book (which I will return to later) but I really wanted to try out a few of the other recipes and wanted to know what other people thought of them.

I chose dishes that really caught my eye. Negroni cocktails made with gin, vermouth (my vermouth is not yet ready, but I’m going to give it a go soon. The process is a complicated one and takes time) and Campari bitters nearly blew my head off 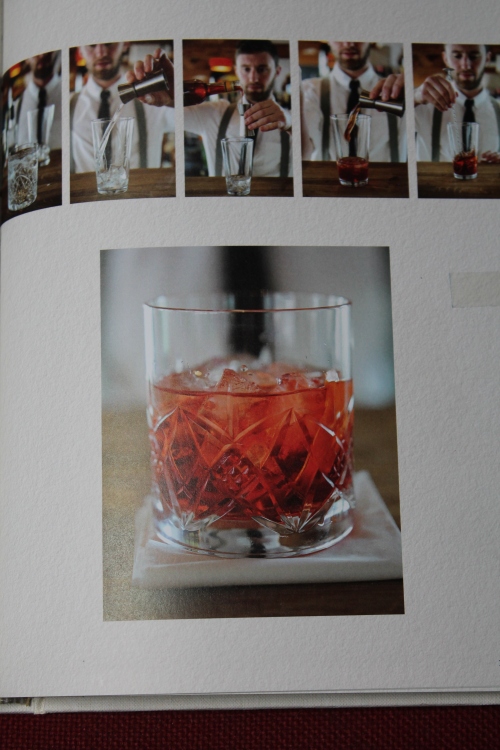 Next came a choice of salad…either fresh crab, new potato and paprika mayonnaise salad, or for those not eating seafood, chargrilled little gem lettuce, blue cheese, roasted peppers and edible flowers. I’d already made the latter for a previous dinner so knew it worked well. Both tasted delicious. Added edible herb flowers were visually very attractive and eye-catching, and except for a little more cider vinegar in the home-made smoked paprika mayonnaise and the use of Perl Las instead of Blue Vinney in the salad we stuck faithfully to the recipe and the flavours were spot on. Our favourite bits were the pickled carrots (in the crab salad) and the Perl Las dressing. 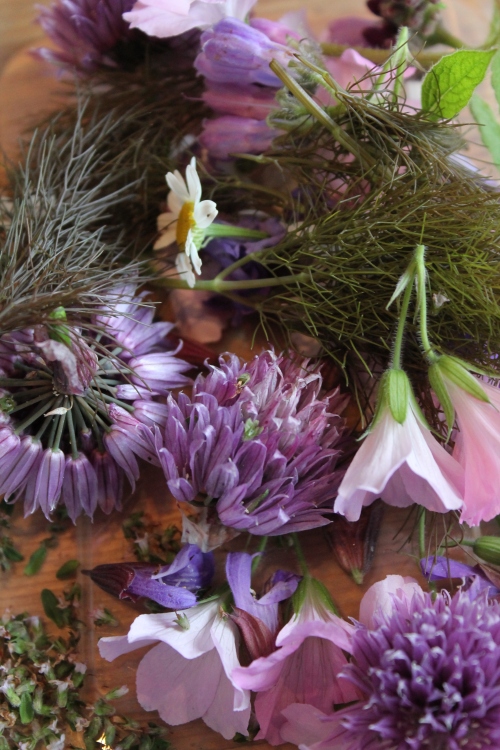 Edible flowers and bronze fennel from the garden 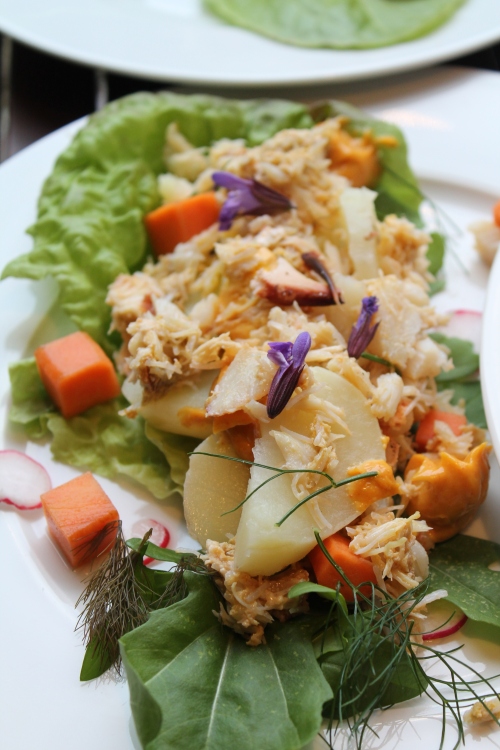 …our least favourite bits were picking over the crabs which is laborious job and a painful one, it left my hands covered in tiny little nicks and scratches (and I didn’t even do most of the work; Mark my new assistant chef did it!). 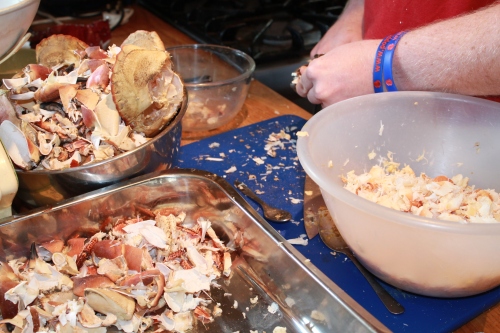 For the main course I chose a slow cooked spring lamb. The recipe in the book called for ‘salt-marsh lamb’ which was hard to find here in Wales (there are salt marshes where sheep graze so that is something I can look in to later) so I settled on shoulders of spring Welsh lamb served with simple sides of buttery new potatoes, new season carrots, foraged marsh samphire, new season broad beans and wilted chard and kale. The skin of the lamb was pierced with a sharp knife and anchovies inserted into the slits producing a salty (but not at all fishy) flavour. The book told me that it would give the lamb an ‘umami’ flavour and it wasn’t wrong! The lamb was then browned in a pan, placed on a bed of vegetables and laced with plenty of Vermouth before being slow roasted in the oven for five hours. 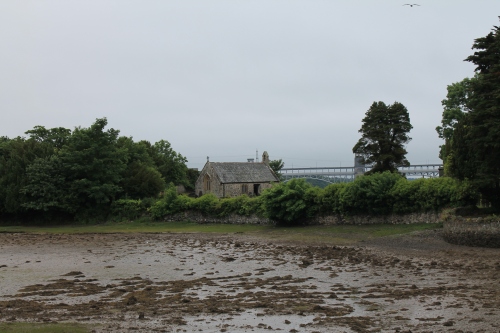 Early morning, low tide, off for a spot of foraging 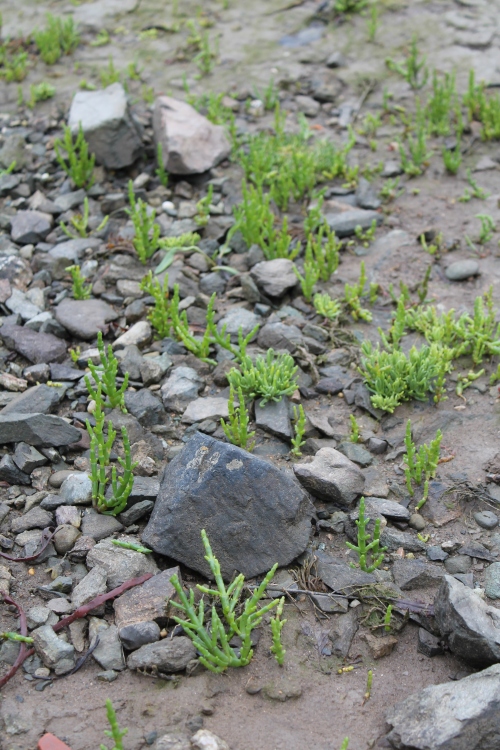 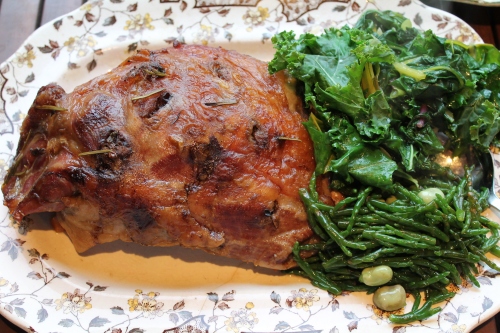 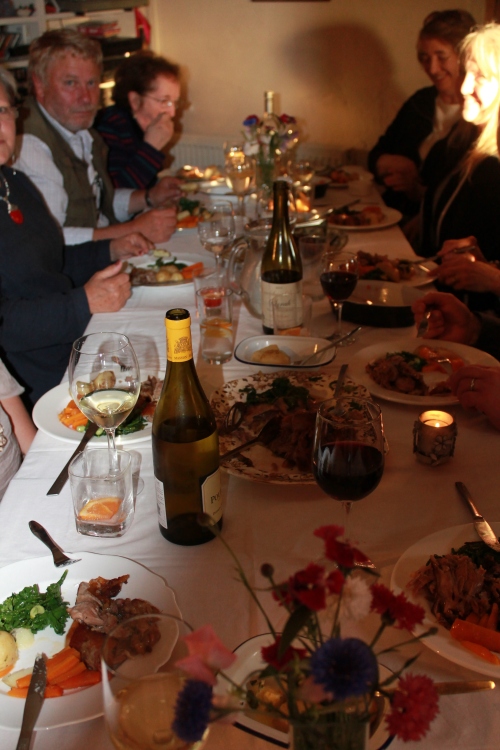 The samphire, lightly pan-fried with baby broad beans, was our highlight…along with the lamb that simply fell apart and melted in the mouth. We hardly changed the recipe; just opting for kale and chard rather than the ‘Tidal Greens’ mentioned in the recipe and it all worked so well together.

A friend offered me a glut of rhubarb earlier this week. Never one to turn down free produce I rushed over to collect, visit, drink tea, play with her new baby and then head off with a boot full of swag. This collection helped with my decision-making on what to make for dessert. The book offers an ‘alternative’ version of rhubarb and custard; a cross between a jelly and a terrine and the most time-consuming of all the dishes on the menu. It involved steaming rhubarb for an hour, straining juice, making custard, adding lots of gelatine, layering and refrigerating for hours in between layers. The recipe irritated both Mark and I with over complex directions but in the end we were very pleased with the results (as were our supper club guests). The only thing we tinkered with was the compote; it was very tart so we added a little more sugar, but not too much as the terrine was very sweet and the sharpness counteracted this beautifully. 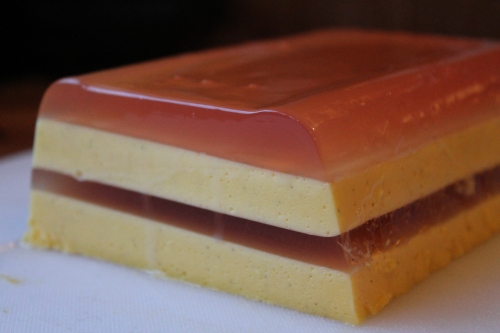 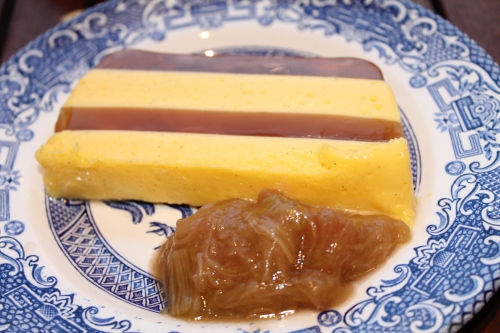 served with a sharp and tangy rhubarb compote.

As a final treat I made the chocolate and salt caramel brownie recipe again, this time cut into bite size pieces to go with tea and coffee at the end of the meal. I didn’t follow their method in the book as I have my own tried and tested way of making brownies, but the recipe was the same. I actually find these get better the day after making them (and for the next two or three subsequent days after) becoming denser and squidgier as they are left. 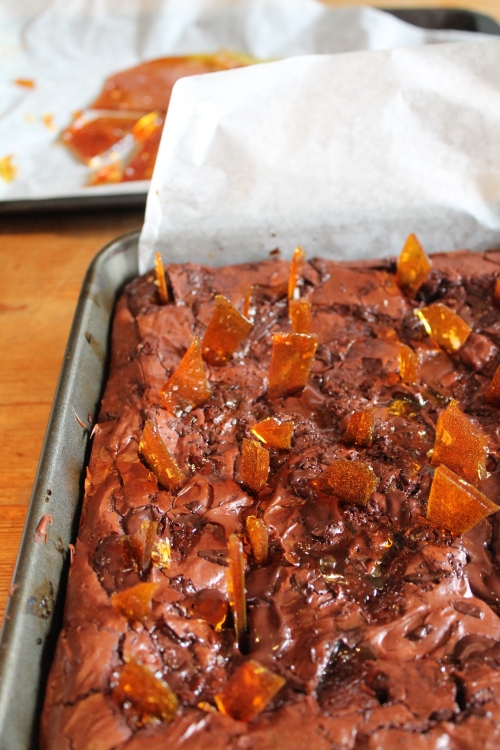 As a parting shot these were a winner.

So, back to the book. All the recipes were well received by our table full of supper club guests, but we did need to tinker with a couple until they tasted as we wanted. The success of the dinner has geared me up to try more from the book as initially I was rather put off by the sometimes overcomplicated instructions.

Tagged as The Ethicurean Cookbook

Recipe review for The Food Travel Company: The Ethicurean Cookbook 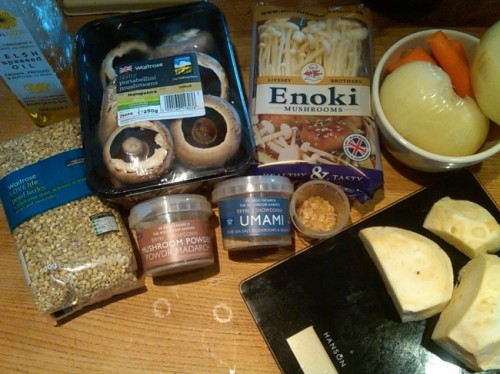 The Food Travel Company recently asked me to test a recipe taken from a newly released cookbook. I had no idea what the book was since it was a blind testing, but I quickly worked out from the list of rather unusual ingredients that whoever the book’s author was they must live in or around the Bristol area.  It transpired that the recipe was from The Ethicurean Cookbook.

Opened a little over two years ago by four friends, The Ethicurean restaurant specialises in the use of seasonal ingredients that are ethically and locally sourced. This commitment can also be seen  in the newly released book. Awarded the Observer Food Monthly Best Ethical Restaurant in 2011, closely followed by a Michelin Bib Gourmand award this year the restaurant is doing very well for itself. The Ethicurean Cookbook follows the team over the course of a year as they create new dishes paying attention to seasonality and the freshness of ingredients. The book presents 120 recipes that represent the best of British using produce grown literally metres from their kitchen door.

I was first asked to cook Goat Meatballs, Mash, Lovage Butter and Mustard Greens but found it impossible to source many of the ingredients so my next attempt was ‘Pearl Barley with Old Demdike and St. George’s Mushroom’. Again it was not possible to find all the ingredients so I had to adapt and make do. To read my full review go to The Food Travel Company blog including the substitutions I made. In the meantime I look forward to trying more recipes from the book; I see it as something of a challenge attempting to source all the amazing ingredients!

As an addendum to the review; other tasters were less impressed with this dish. I think was in part due to a general dislike for pearl barley as a grain, although one taster suggested that although the dish was not unpleasant, it wasn’t something they would choose to eat again. 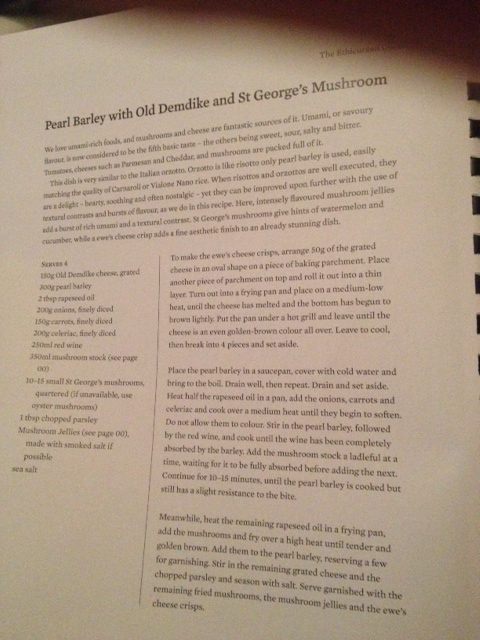 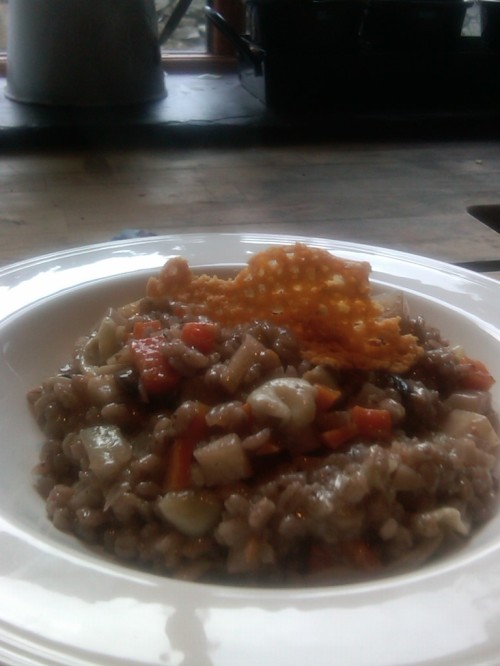 Tagged as The Ethicurean Cookbook, The Food Travel Company