Somewhat daunted at cooking a vegan birthday lunch for Emma, local vegan cook from earth kitchen I thought that the best way round it was to experiment a bit and embark on a slightly different menu to my usual theme of modern British and European cooking.

I’d also recently been inspired by Steve Parles South-east Asian menu at the Dock kitchen, where I was taken for my birthday in March. Fabulous food, my only criticism was that it was what I call ‘London potions’ i.e. not large enough to feed a rat, let alone a country girl with a healthy appetite. I do have to give him a big thank you for the Tamarind sorbet recipe….I collared him at the end of the meal. He’d made it up himself, so I was dying to give it a go….the other half said mine was better, less sickly sweet and pairing it with the mango coconut cream broke down the sharpness of it…having said this it was probably more than his life’s worth to say it wasn’t!!

My variation of Steve’s menu ran as follows;

I have to admit I misjudged portions on the starters, so it was smaller than intended (more London than mountain sized) but the flavour was superb. This was primarily because it was impossible to get green Papaya. Not seasonal granted, but mixed beautifully with local shredded carrot, cucumber and coriander root.  I ended up serving the fried bean curd, which I’d bought from the Garden Hotel Chinese shop in Bangor, with the salad as I could only use half of each Papaya as they were just too ripe. They felt hard enough but you can never tell I guess.

Unfortunately like many small shops, the Chinese shop in the Garden Hotel has been hit by the supermarket and lack of use has brought its demise. It’s a case of use it or lose it. The girl who worked there told me it would be closing down soon.

It was also here that I got hold of the semi-dried Tamarind, palm sugar and lemon grass. I know some of these things are available in Tesco’s but I’d prefer to spend my money elsewhere!!

Again, I know squash isn’t seasonal but on this occasion I broke the rules!!

“Denise***Thank you for a fine dining experience.  Exactly what eating out should be all about.  I haven’t had a cooked vegan meal as good as that possibly ever!”

which pretty much made my day xx 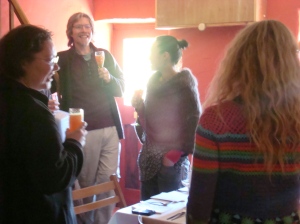 Emma and friends with Pomegranate and blood orange Bellini'

toasted sesame caramel looking like a weird sticky mess. It did break up well once it had hardened

serving out the salad and bean curd starter...too damn small for my liking!! 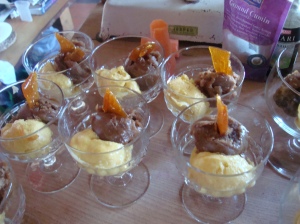