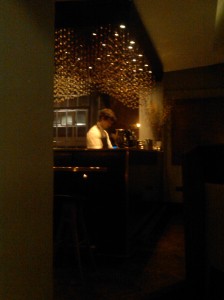 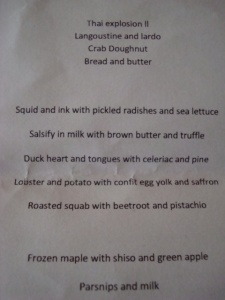 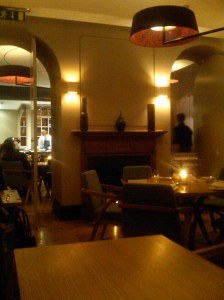 Portuguese chef Nuno Mendez earned his culinary stripes at Jean Georges in New York, the Coyote Cafe in Santa Fe, via a quick stint at Michelin starred El Bulli in Roses, Catalonia, before opening his own restaurant Bacchus in Hoxton market which received much praise and plaudits. When this closed he started running his own innovative private secret supper club, The Loft Project, which Mendez used as a platform for experimentation before the opening of his new ‘official’ restaurant Viajante.

I admit that Viajante is the kind of place that is generally out of my price range and it certainly doesn’t serve the kind of food that I would usually cook or find myself eating. Tasting menus don’t usually hit the mark for me; they are as they sound, just a taste and If I like something I want more than a taste and if it’s not something I like then it’s a waste of money! However, since I was staying just five minutes’ walk away and Mendez’s culinary skills and style have intrigued me for a while, I decided to pay a visit and see what all the fuss was about.

Viajante is based in a unprepoposing part of East London, 2 minutes from Cambridge Heath station and five or ten minutes from Bethnal Green tube. I walked from my hotel past rough and ready looking shops and warehouses wondering where this amazing place might be. Suddenly, there it was, Patriot Square and the grand Town Hall where Viajante is located.

The two guys that greeted me at the door were as painfully hip as I expected. I’m not sure which one was the Maitre D but they were both really friendly, explaining in great detail the type of menu’s available (I opted for the six course blind tasting menu at a fairly hefty £65). I then had to wait almost 40 minutes for a table (amazing on a quiet Monday night, but testament to Viajante’s popularity) but in the meantime he was  happy to listen to me prattle on about supper clubs, food blogging and life in Wales (apparently he’d studied here) and he was very sensitive to the fact that I had to get up at 5am to get a train back to Wales.

Having directed me to the stunningly decorated bar (designed by award-winning architects Rare) and including installations from fashion and lighting designers and local up and coming East End artists, I settled down with a Tanqueray and tonic and soaked up the environment (I was particularly taken with the beautiful lamp shades, stunning and exquisite beading lining each one).

The Maitre D made a point of bringing me my first dish as I sat in the bar, to speed up the process and once ensconced in the restaurant my waiter continued to bring me the other courses at a steady consistent pace. At the end he claimed he’d never served a tasting menu so quickly, but I was still there for an hour and a half. 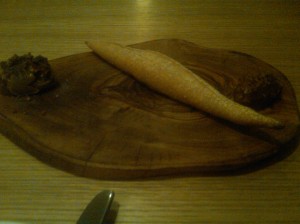 strange shaped bread with two butters, I can't remember what was in both but I know one had black pudding in it. It was rather nice 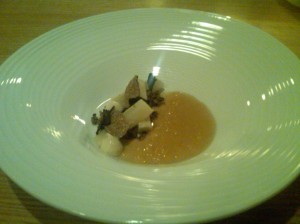 salsify in milk, with brown butter and truffle, this was one of my favourites 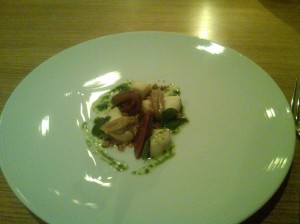 duck heart and tongue with celeriac and pine....my least favourite 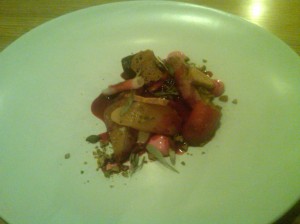 Roasted squab with beetroot and pistachio

The six courses were supplemented with bread, entrée and petit fours and although a taste is all they were I didn’t leave hungry because many of the combinations were quite rich, all you really needed was a taste. I didn’t photograph everything as I got carried away with eating so I missed the squid and ink with radishes and sea lettuce which I quite liked and the entrée’s and petit fours.

My highlights though were the salsify in milk with brown butter and truffle (rich, meaty flavours from the beef jelly contrasted with the woody truffle and delicate salsify), the roasted squab with beetroot and pistachio (pistachio, beetroot…all my favourites combined with the tender roast squab, kind of sweet and rich but also a little sharpness from the beetroot reduction) and being such a lover of desserts and ice creams, the frozen maple with Shiso (a herb from the mint family) and green apple which arrived as a palate cleanser before the main dessert  was a beautiful combination of sweet (the frozen maple) and sour (the  crisp green apple). The meal concluded with petit fours and a tiny shot of what was I think Crema Catalana (although I’m not totally sure as there wasn’t obviously caramelised sugar on top). 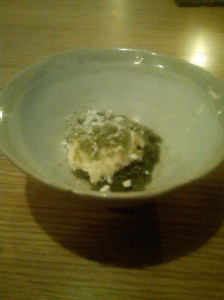 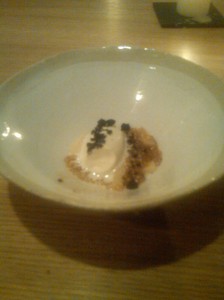 parsnips and milk...sounds weird but the milky ice cream with olive and the tapioca were nice...couldn't handle the parsnip cream though!

As much as I loved these dishes I can’t say everything worked for me. The langoustine and lardo I found rather slimy and it almost made me gag (texture as opposed to taste got the better of me), the duck heart and tongue with celeriac and pine was just too unusual a combination and I found the duck too rich, and the lobster and potato with confit egg yolk and saffron was rather sickly (plus I have a thing about runny egg yolk and try as I might I couldn’t suspend my usual aversion for the sake of a gastronomic experience). I did like the fact that the waiters were genuinely interested in what the diners thought and were happy to discuss our feelings about the dishes.

Was it worth the money? Well, yes and no. I’m still not sold on tasting menu’s because when I go out for dinner I like to eat! I’m a girl who likes a decent helping of food. There were some amazing taste and texture combinations, and ingredients I hadn’t tried before, or in the combination presented and as I said before I didn’t leave hungry.

Did I enjoy it? I think enjoy might be the wrong word. Again, it was a fantastic experience, a great chance to experiment with flavours, but at the same time I found some of the combinations quite a challenge. I know what I like and I have pretty eclectic tastes….so I don’t think I’m old fashioned or less open to new ideas, but to be honest I didn’t enjoy it all; so that said I’m not sure if I would go again, but at the same time I’m glad I tried it to come to that decision.

Tagged as eating out in London, Nuno Mendez, Reviews, Viajante