Last week was a whirlwind of activity, beginning with a pop-up cafe and jam & chutney stall at the Ogwen Christmas produce and craft market and finishing with three back-to-back supper clubs.

The market was reasonably simple cooking lovely dry cure bacon baps, home-made Moroccan chick pea and spinach soup and Welsh rarebit (made with strong Welsh cheddar and ale) and chutney:….but it was a busy day. I hadn’t anticipated it being so busy and since we were not allowed to use the bigger chapel kitchen I ended up stuck in a tiny poky kitchen with very little surface space, no electric and a boiler that seemed to take for ever to heat! People queued for coffee and we waited….and waited….but all was well in the end and we sold out of bacon, baps and Welsh rarebit…I also sold out of jam & chutney which pretty much put paid to my second stall at the Moelyci Christmas fair…but Sophie of Phia designs (my wonderful seamstress friend that makes all my table linen, napkins, aprons and the most gorgeous little hemp bags which I used for my Christmas hampers) stepped in to sell her lovely fluffy scarves, hats, bags and other stuff made from recycled organic cotton and materials. All I had left from the market were enough jars and bags to make four hampers; which I also sold. 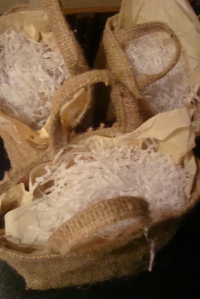 Jam and chutney depleted and with two days break, it was time for three back to back supper clubs. Now I like a challenge but on this occasion I was just plain silly…I got carried away at the planning stage because I wanted to cook everything, so I ended up not only offering a menu choice but three starters, three mains and three desserts; which I cooked on my own. Crazy woman…yep thats me! The dishes were as follows…but you have to forgive my lack of pictures…cooking and photography were one step too far!

I spent the week cooking in bulk although  the menu was  actually a simple one with lots of scope for pre-preparation. The soup, trifle and brownie were Hugh Fearnley-Whittingstall recipes; the mushroom risotto I adapted from a River Cafe recipe and the chicken from a Jamie Oliver recipe.

The mincemeat ice cream was my own, successful creation and the mussels, crumble, pork, dauphinoise and ratatouille are standard combinations I regularly cook. I made two different pate variations, one my own which I wasn’t totally convinced by and a second (a Raymond Blanc parfait recipe) that I liked even less. Everyone else really liked both, but I was looking for something lighter and creamier and both recipes I used made a rather strong pate.

For those that asked and are keen to know, the ingredients used in the meal came from the following local suppliers….

Anglesey chicken, Chicken livers and Wrexham pancetta came via Williams the butchers or Johnny six as they are known locally

Thyme and rosemary and bay from my garden

raspberries and black currants from Moelyci

and I think that might be it!!….Truly a 30 mile Christmas menu! Here are a few pictures from the evenings…there aren’t many as we were so busy and no pictures of desserts which is an absolute crime!! 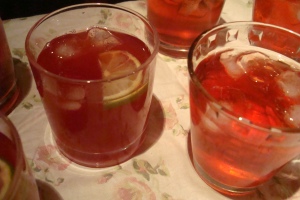 Christmas seduction cocktails (named by Rosie the waitress)...apparantly it was a 'sexy' cocktail that needed an appropriate name!!... 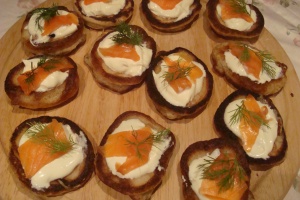 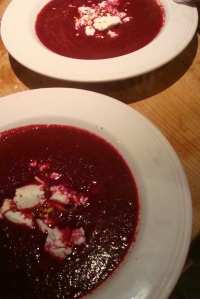 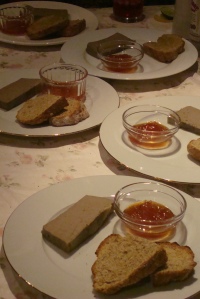 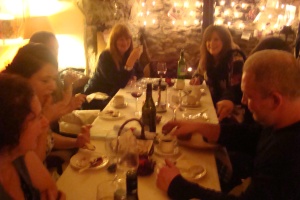 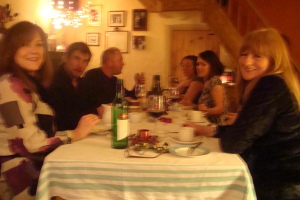